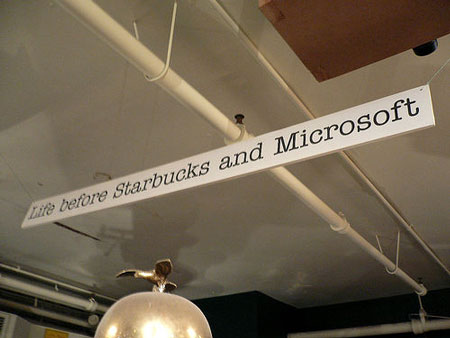 I know you never thought you would ever hear a New Yorker say, “I can’t find a Starbucks,” but I really think I might be on to something here.

This morning was a fairly insane morning so I did not have time to brew my own cup of joe. I’m also running a little late so I don’t have time to run into the Starbucks on the corner. So what am I to do?

All of a sudden, it hit me: Why isn’t there a Starbucks in the subway?

I’m not saying we need something extreem like a Starbucks car in every train (that would be cool though.). However, a Starbucks on the platform would be awesome!  They would make a killing. Plus, the fresh brew might help mask the subway odor. There would be dozens of people lined up on every platform. Think about it. There aren’t many businesses where your customers are going to litterally be dropped off inside your store.

We could start my renovating a few of those platform newstands into little coffee bars. Sweet!

Now, I am by no means a Starbucks advocate. As a matter of fact, SUBWAYblogger doesn’t even think Starbucks is that good. However, they do seem to be the most likely to buy into a concept like this. Afterall, they have already run out of above-ground places to put more locations.

We could even take this to the next level by having them open all night. How cool would it be to be on your way home from the bar, drunk as hell, and be able to get a coffee fix right there on the platform?

Ohh we’re going places with this one!
Live from the subway, back to you in studio…

One thought on “Where’s a Starbucks when you need it?”