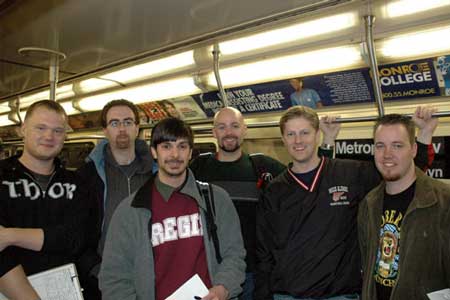 …for real this time. Allow me to clarify.

You’re probably saying to yourself, “Hey, didn’t a couple guys already break that record this summer?” Well, sort of. Yes, they broke a record, but it wasn’t the real record. They broke the amateur record.

They’ve caught a bunch of flack in the media for claiming to break the record, even though it wasn’t the official record. However, to their credit, they’ve never claimed to be official. Their website clearly states that they were just doing it for fun, and going after the amateur record. Click the read more link to see their route plan.

This group of dudes are attempting to break the…professional (?)…uhh…official subway riding record.

Let me break it down. There are two main subway riding record classes.

Kevin Foster currently owns the Class B record, which he set back in October of 1989 with a time of 26 hours 11 minutes, and it is recognized by the Guinness Book of World Records.

So who are these guys? Well, they are pictured above. Stefan Karpinski, Andrew Weir, Bill Amaosa, Jason Laska, Michael Boyle and Brian Brockmeyer. They have a live blog and website for their attempt.

At this point, you are probably thinking, “Holy shit, this stuff is a bit too official sounding.” Well, it gets freakier. There’s actually an official group that keeps track of the subway riding record, the rules, rider logs, etc. I know…WOW.

This summer’s record breaking event attracted the world wide media. That’s right…world wide. AMNY, The Daily News, CBS, CNN, NBC, ABC, BBC, etc all covered their ride. Must have been a slow news day. So SUBWAYblogger is left wondering if this more official attempt will get any where near the amount of coverage that these guys got.

They did make the 11pm news on CBS2, but not their website. Looking at their site, it seems that the Daily News and HBO have caught up with them mid-ride too, so we will look for that story in the morning. AMNY did a preview story too.

This was the plan used by the guys that broke the record this summer.

Start: Rockaway Park
S to Broad Channel
A to Far Rockaway
A to Rockaway Blvd
A to Lefferts Blvd
A to High St
A to Broadway Junction
L to Canarsie
L to 14th St/8th Ave
A to Inwood
A to 168th St
1 to Van Cortlandt Park
1 to Times Square
7 to Queensboro Plaza
N to Ditmars Blvd
N to Queensboro Plaza
7 to Flushing
7 to 74th St/Broadway
V to 23rd St/Ely Ave
G to Hoyt-Schermerhorn
C to Franklin Ave
S to Botanic Garden
3 to New Lots Ave
3 to Franklin Ave
2 to Flatbush Ave
2 to Fulton St
J to Broad St
J to Fulton St
4/5 to Bowling Green
4/5 to Fulton St
2/3 to Chambers St
1 to South Ferry
1 to Chambers St
3 to 148th St
3 to 110th St
2 to Wakefield
2 to E 180th St
5 to Dyre Ave
5 to 125th St
4 to Woodlawn
4 to Yankee Stadium
D to Norwood
D to Grand St
D to Rockefeller Ctr
F to Jamaica
F to Kew Gardens
E to Jamaica Ctr
J to Myrtle Ave
M to Middle Village
M to Myrtle Ave
J to Chambers St
4/6 to 59th St/Lexington Ave
N to 59th St Brooklyn
R to 95th St
R to 36th St
D to Coney Island
N to Pacific St
Q to West 8th St
F to West 4th St
A/E to Canal St
E to 51st St
6 to Pelham Bay Park