Have you seen the new (sorta) KICK map for the subway. It’s a new subway map concept by a design firm that thinks they have a better way to demonstrate how the subway lines run. 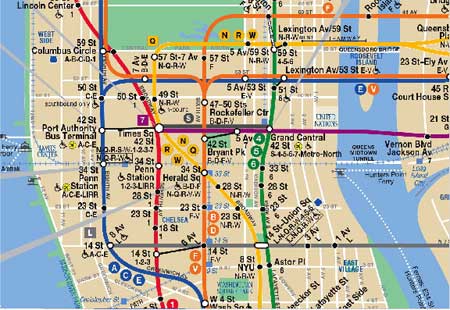 So you get the basic idea by seeing the side by side comparison above. The KICK map has a “line” for each line…go figure. This is supposed to make it more obvious where each train line runs and branches off.

So what’s the deal with “KICK” ? That’s what we wondered too. We thought it was going to be a catchy acronym for something. Turns out the design company’s name is KICK. Minor let down.

In any event, the MTA quickly cut down the idea three years ago and again recently. They think the map isn’t geographically correct. We can see that. The lines do get a little “fat.” It kinda makes it look like the subway line is a few blocks wide when we all know it isn’t.

Eddie Jabbour, (the designer) is sticking with it. He’s going to keep tweaking it until it’s something the MTA will be forced to seriously consider. With all the Internet buzz, who knows, maybe there will be a big push behind it.

Although, I don’t see many New Yorkers having trouble with the current map. Maybe the KICK map could be the tourist version? A Subway for Dummies version perhaps.

5 thoughts on “New NYC Subway Map: Keep it or KICK it?”