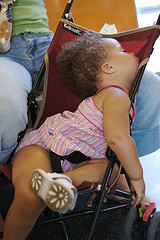 Is there any more annoying sound than that of a crying baby? Not an infant baby (but I guess that could get old too). I mean a bratty toddler baby.

I suppose the only thing that makes me want to break things more than their screams is the idiot parents. These moron mothers that just sit there and don’t do anything while the kid screams! It would be one thing if the kid hit his head or something and had a legit reason to cry. But no. The kid is crying because he’s just a brat, and the mother let’s them keep screaming. These parents should be slapped.

Ohh and those parents that just let their kids go nuts on the subway should have their heads held in the door as it closes. You know those elementary school aged kids that yell and climb up on the seats. UUGGGHhhh. Again, the kid is annoying as hell, but it is the parent’ fault that they are allowed to behave that way. SUBWAYblogger’s parents would have knocked the snot out of us if we behaved like that.

So let’s all join together in an effort to do a little parenting. “It takes a village city” to scare these kids straight. So next time you see a little punk bothering the crap out of your fellow passengers, get up and do something. Whatever you decide to do, make it loud, and make it into a scene. Make sure that the parents see you do it. If they say something to you say, “Ohh I didn’t know he was your kid. He’s acting like a little shit so I figured he was on board alone.”

Together, we can make a difference.