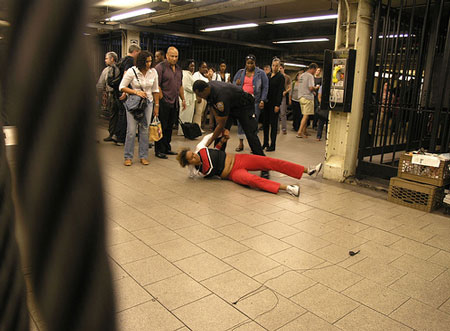 A few weeks back, SUBWAYblogger wrote about how the subway recently enjoyed a 37 year low in crime. That’s right, subway crime is currently at its 37 year best.

However, we now wonder if the type of crazies we’ve seen lately have been included in that number.

For example, when someone throws themselves on to the tracks in an act of suicide, does that count as a crime? I guess it should.

First of all, suicide is illegal. Secondly, disrupting train service is also a crime. And the trauma inflicted on the innocent witnesses should be a crime to. So, again, I wonder if that is included.

It seem to me (in a completely nonscientific way) that there’s been a spike in people finding themselves under trains lately. This is NOT a victimless crime. The biggest victims are the motormen who drive the trains that hit the crazies. They must feel really guilty even though it is by no means their fault. Then there’s the witnesses. Lastly, all the people put out by the massive service outages as a result.

So it is definately a crime, but there’s rarely a criminal to punish.

3 thoughts on “How is that crime number now?”