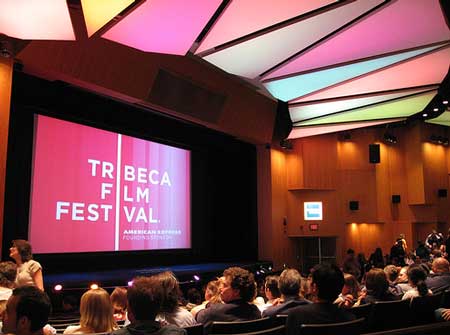 The Budweiser Select subway ads are back promoting the Tribeca Film Festival again.   They always make me laugh because you don’t think of beer and movies.  You especially never think of the sophisticated film arts crowd and Bud Select.  But there they are, all over the subway.

Clearly, Bud pays for the ads as part of their association with the Film Festival.  So, the Film Festival is just happy go get whatever free advertising they can.  Completely understandable.

So here’s an idea.  I think they should promote that you get a free beer with your ticket when you come to see the films.  Granted, I don’t think that they have much problem selling tickets.  It tends to be a celebrity hotspot.  Even celebs not involved in a specific film show up to “support the art.”

Last year’s ads are the exact same ones they used this year.  Instead, they should have on there that you get a Bud or two for free during the movie.  I’d probably go…even though it’s cheap beer.

Who drinks Bud Select anyway?  And what ever happened to Zima?   I digress.