There’s this new TV show on the History Channel called Sandhogs.  No, we’re not being paid to write this, so everyone relax.

This is a whole reality show is about a crew of guys that dig massive tunnels for a living.  Makes it sound easy, but it’s not.  They are digging a huge water tunnel to for the Croton Filtration plant in the Bronx.

Anyway, the show reminded me of what it must be like to dig the Second Avenue Subway line.  I’d imaging the diameter of the tube is much bigger because it’s go to fit trains, but it must be kind of the same.

The city is supposed to bring in a TBM to dig the tunnel.  Honestly, I have no idea if there’s even one here yet.  I haven’t heard anything about the TBM’s in at least a year.  In light of all the construction delays, I guess it doesn’t really matter.

An interesting show for guys that liked to play with toy trucks and diggers when they were kids.

Yeah, so it’s rainy as hell, but at least it’s a little cooler out today. That’s a refreshing change.

Unfortunately, it is still humid as hell on the subway. I had the unlucky fortune of getting on car without air conditioning. It was just as crowded as always, so that kinda kept me from being able to jump ship and run to another car. There was a high risk that I might not have been able to get back on board. With the poor reliability of service in heavy rain, I wasn’t about to get out, miss the train, and wind up stuck on the platform forever.

In other news, the Straphanger’s Campaign State of the Subway report comes out tomorrow today (damn you day old wire story)!! In a sneak peak, it seems that the R and W trains aren’t getting a good rating (shock and awe). As a matter of fact, the report is going to be released outside City Hall’s R and W station.

Last year, the 6 train was rated highest. SUBWAYblogger doesn’t think that will be the case this year.

The report should be especially interesting considering the changes that lie on the horizon. Increased fares, congestion pricing, and the behemoth Second Avenue line. This report should be a fairly accurate barometer for telling us if the system can handle the increased load.

Obviously, without even looking at the report, we all know that that the answer is NO. However, now that Bloomberg was able to push congestion pricing through, the City will be eligible for $500+ million in funds to improve the infrastructure. So, much of that cash **should** be going toward improving mass transit as well as getting the toll system up and running.

So, the worst rated lines might be the best areas to start improvements. We’ll see.

Ladies and gentlemen, may we present the latest MTA employee, the TBM.  I wonder if it’s in the union?

Anyway, this machine is the workhorse of subway tunnel system.  It’s going to do most of the Second Ave tunnel digging.  They can even be fitted to lay the concrete roof structure and tracks!  So they can do a heck of a lot of the work in an automated fashion.  Also, they should cause the least amount of disruption up on the street level.

The MTA has released renderings of potential subway entrances along the Second Avenue line.  They look pretty cool.  I’d settle for a boring industrial look if it meant spending less money on this project, but whatever.

Anyway, the subway line isn’t going to be done for what….10 or more years at least?  So why would you mock up something as trendy as this so early in advance?   Who knows that will be the style a decade from now?

Maybe by then, the abstract, idustrial look will be out.  Or maybe there will be better technology that would allow a cooler look.

Anyway, should we be picking out the wall paper and paint colors just yet?  Or would it be better to wait unil…ohhh…a year or two before the project is done?

Ok fine, SUBWAYblogger completely wussed out of going to the ceremony today. It ended up that it was inside the previously existing subway tunnel, so it was out of the rain.

It still sucked that they were requiring the press to arrive at 9am for a 10:30am event. That’s a little lame.

I wish I had thought of live blogging the ceremony like Jenn at Gothmist did. The rain must have washed away my creative juices 🙂 .

Example:
10:30: No groundbreaking ceremony yet. The MTA is already behind schedule on the 2nd Avenue Subway! Clearly a sign of things to come!

So over all, the ceremony wasn’t that exciting. Still would have been cool to be there to video tape it. Maybe I’ll attend when the first train runs down the line.

Tomorrow is the ground breaking for the 2nd Avenue Subway! No seriously, it’s really happening.

There’s no stopping it now. The shovels hit the dirt…again. That’s right, again.

Back in 1972, Gov. Nelson Rockefeller and Mayor John Lindsay participated in a ground breaking for preliminary construction of a Second Avenue subway. That tunnel was planned to run from 101st to 120th. They even had more ceremonies in 1974 and 1975.

However, in 1975, the MTA ran short of funds after already spending $1.3 billion. That’s billion with a “B.” All work on the project stopped. Mayor Abraham Beame ordered the tunnel to be sealed in 1975.

So there Gov. Spitzer and others will stand in the site of the reopened tunnel to participate in tomorrow’s ground breaking (or is it re-breaking?).

SUBWAYblogger hopes to be on hand to witness the historic moment in person.

How ’bout this for extravagant: Glass, floor to ceiling doors/walls that line the subway platform. Kinda like the glass doors at the AirTran stops or the monorail in Las Vegas. Ooo…I wanna go to Vegas.

In a nutshell, the doors and walls would provide a barrier between the tracks and the passengers on the platform. The idea actually sounds nice. They look kinda cool too. But unless the glass door company starts handing out free doors, it’s going to cost an ass load. Ohh, and it would only be for a few stops along the new 2nd Ave line.

So what’s the point? Well, they apparently help keep the platforms cooler by about 10 degrees!! That would be pretty sweet. Sure, shaving 10 degrees off of the already 105 temperature still leaves you with 95 sweaty degrees…but hey, at least it’s something.

Also, the doors keep trash off the tracks. Oh, and people too for that matter! It’s much harder to jump in front of a train when there’s no way to get out on the tracks.

Anyway, the MTA is looking into it. Sounds like a pipe dream though.

So the Second Ave subway project is already over budget. Yeah, I know. I said “What a surprise,” when I heard that too. A shovel has not yet hit the ground and they are planning to start $54 million in the hole…so to speak.

Rising real estate prices will force the Metropolitan Transportation Authority to pay about $54 million more than it had anticipated to buy five Upper East Side buildings and portions of 24 others to make way for construction of the Second Avenue subway, according to a new estimate provided to the authority.

Sometimes is makes me wonder why they even budget things like this. You know it’s going to go way over, and not just by a little bit. All they have to say is that they need more money, and the get it!

Don’t get me wrong, I’m all for the new line. However, lets just cut through all bullshit. We all know they they are going to go through with it. Once it starts, there’s no way in hell they are going to stop in the middle. Knowing that, contractors purposely hide costs that “all of a sudden” show up after the project gets under way. Why? Because the extra costs will just get approved and swept under the carpet.

That’s why I’m sorta shocked about this real estate news. Isn’t it someone’s job to think about this stuff?

Check out the Second Avenue Saga’s FAQ section. It is probably more than you would ever think you’d need to know about the new line. However, if you live on 2nd Ave, this is probably important to you.

“T” Time? AMNY has clearly been itching to use that headline, and this morning they finally did.

Anyway, the plans for the Second Ave subway line were released. Here’s some of the drawings. 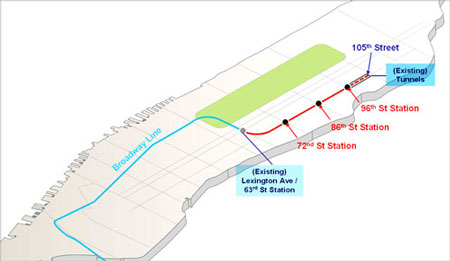 They also had some artist renderings of what it will look like inside.

Is that not the cleanest looking subway mezzanine you’ve ever seen? Are they launching a new technology that allows the subway to clean itself?

And a typical platform. It was a nice touch to add someone waiting for the elevator. Notice that they didn’t show him getting on the elevator. That’s because they want to show that there are elevators, but let’s be honest, they’ll rarely ever work. 🙂 Also, for the guy in the front with the suit case…”Backpacks and other large containers are subject to random search by the police.” Just a heads up.

Elliot “Lee” Sander, the MTA’s new executive director, and Chairman Peter Kalikow will approve the $333 million contract for the first phase of the project that critics thought would never happen.

“All of the sudden it turned from doubtful to inevitable and nobody quite knows when it happened,” Kalikow said at the last MTA board meeting.

Almost immediately after the contract is signed, construction trailers will start to line parts of Second Avenue in the East 90s, MTA officials said. –AMNY

So from this spring until 2013, hold your breath upper-east-siders. It’s going to be a noisey couple years. I was hoping Second Avenue Sagas would have something to say on the matter, but nothing as of yet. I’m sure he will have something up soon. In the mean time, I’ll stick with Chuck.

As expected, Second Avenue Sagas came through with a post on this story. I knew it would only be a matter of minutes!