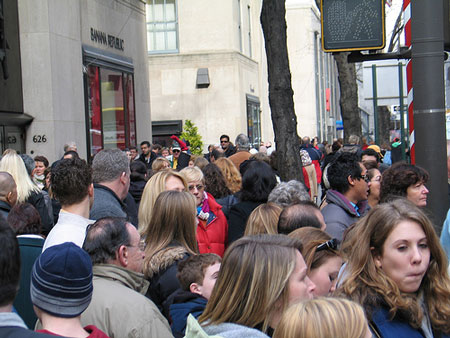 4.5 Days to go. Just keep telling yourself that. 🙂

SUBWAYblogger didn’t take its own advice this weekend. Somehow, I ended up in midtown, crossing 5th Ave too close to the tree at Rockefeller. As predicted, it was pretty crazy.

I figured, what the heck, it’s after 8pm on a Saturday. Most of the shopping crowd is probably gone. Uhhhh nope.

I thought for sure that I could get off well above the heart of Times Square and easily walk across town. Strike two.

The police were in the process of shutting down blocks around Rockefeller. The crowds were litterally spilling out into the streets blocks away. Eventually, there was no way traffic was going to get by, so they began throwing up the barricades.

The subway was no joke around there. At one of the Midtown Lexington Ave stops, the MetroCard machines all stopped working! They all had an Out of Service message on the screens. The line for the booth went all the way up the stairs. Why? Because the tourists don’t know that they could easily walk down to the next stop.

It was an interesting sea of humanity.