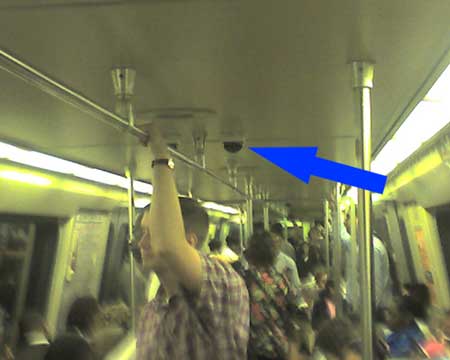 Digital video cameras coming to a subway car near you.  Or maybe not.  Or yes.  But perhaps no.  Huh?

We still don’t think the MTA knows what they want to do yet, but they are starting to dip their toes in the water with this idea.

The MTA has asked some subway car manufacturers to investigate installing digital surveillance systems on all the subway cars.  Yes, that sound you hear is in fact the ACLU growling along with every other privacy advocate group in the Tri-state.

SAS thinks that SUBWAYblogger won’t be too “enamored with the idea,” but we actually don’t think it’s a big deal.  So you might get caught picking your nose on the train.  And you might get caught on tape when you’re working on your graffiti.  Also, that dream of having sex in an empty subway car probably wouldn’t happen…unless the camera thing is a turn on.

There’s some positives.  You might be self conscious about your odd behavior, but think about the criminals.  Next time you get your purse snatched, the thug might think twice if he thinks he could get caught on tape.

So I hate to sound like “the man,” but if you aren’t doing anything illegal, what do you have to worry about? Washington, DC is already doing it (see picture above).

Anyway, the whole idea will cost a shat load of money, so don’t hold your breath.