Dustin Dibble, 25, of Brooklyn fell onto the subway tracks back in April of 2006.  A train came and ran over his leg.  Unfortunately, the leg had to be amputated at the calf.

Dibble was drunk at the time and reportedly had a BAC of .18.

The courts just awarded him $2.3 million!

The train operator’s lawyer says the driver thought Dibble was simply trash on the tracks.

Dibble admits being intoxicated and does not even remember the incident.

So how is it that this is the fault of the MTA? This guy was drunk, fell onto the tracks, and was hit by a train.  It is absolutely an unfortunate situation.  Obviously, Dibble will never be the same again, but how is that the fault of the train?

It’s not like the driver actually saw a person on the tracks and said to hell with it…hit him.  It’s extremely traumatic for the person driving the train when they hit someone.  Actually, the MTA requires crews associated with this kind of incident to undergo psychological counseling.

It just boggles the mind.

So like I said, the rain is bad news.

My ride home was all f-ed up.  I got onto the platform only to see 10,000 other people already waiting for the train delayed due to rain.

By pure miracle, I made it onto the first train that finally came 15 minutes later.  People were getting so pissed that they left the station (to go back out into the rain!).  It just so happened that a guy in front of me got fed up and left.  A minute later, the train came and a door lined up with me perfectly.

The train immediately switched from a local to an express train…pissing off many.

So yeah, being right all the time is getting pretty old.

Here’s  disturbing blurb from the AP I came across today:

Federal authorities are warning law enforcement personnel of a possible terror plot against the New York City subway system during the holiday season.

An internal memo obtained by The Associated Press says the FBI has received a “plausible but unsubstantiated” report that al-Qaida terrorists in late September may have discussed attacking the subway system.

Anti-terror agencies say they have no specific details to confirm the plot has moved “beyond aspirational planning,” but are issuing the alert out of concern that an attack could come during the holiday season,” warns the memo, which is dated Tuesday.

While federal agencies often issue all sorts of advisory warnings, the language of this one is particularly forceful.

Goooood times.  So in addition to battling the tourists on 5th Avenue, and trying not to kill yourself inside Toys R Us, you now have to work about getting blown up on the subway.

I have to say, I did not notice any additional security in the subway system today.

Would now be a good time for the terrorists to attack?  Probably.  The subway will be at it’s peak volume all December long.

Then there’s the Presidential transition.  Bush already has one foot out the door.  He’s in no position to be able to make long term decisions appropriately because he won’t have to deal with the consequences.  All he will have to do is make it through the following couple weeks and then it’s Obama’s problem to deal with.  It’s probably the time that the country will be weakest. 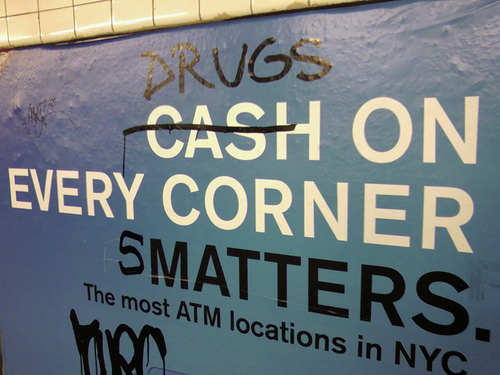 Or at least discuss strategies.  Yikes.

There’s two fairly large, old men that ride the subway every morning.  I see them at least a couple times a month together.  They’re already on the train when I get on, so they must live further uptown.

They have really distinct old-man gravely voices, and are quite round in the middle.  They usually sit across from each other on the train and chat about old men issues.

Today, I was close enough to be able to understand what they were talking about.

Turns out, they are old men drug dealers.  Good to know that age is just a number.

“He keeps asking for four, but i can’t get him that many.”

“Why not? I thought you got six when you go up there.”

“So you keep the rest for personal use.”

“Yeah, and my guy won’t sell me more than that.”

“So here’s what you do, you tell him you can get six but you’re gonna have to make two trips.  When you come back, say you could only get three.  Then when he makes a fuss about it, tell him you have a fourth, but that’s it.”

“Or you sell him three today, and three tomorrow.  Then you still have six left over for the next time.”

So it was a meeting of the minds to say the least.  They then got into a discussion about people buying on credit and not paying up.  Good times. 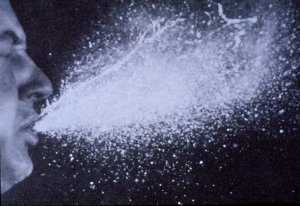 I was on my way to a second day of torture jury duty.  I made my connection to an express train and actually scored a seat.  Sweet.

It was a pretty crowded train, just as any train rolling through midtown during rush hour is. All of a sudden…

A few sneezes ring out in the crowd.  That’s just gross in general, especially in a crowded train.  But hey, it happens.  There’s nothing you, as the sneezer, can really do to avoid it.

Unfortunately, this guy didn’t even make an attempt at covering his mouth.  He just let them rip like he was standing alone in the woods or something.  WOW.

Well, I thought the people around him were going to commit a hate crime.  Holy crap did this guy get reamed out, and deservedly so.

Much to my disappointment, there were no punches thrown.  Oh well.  Gonna file this one in the “crime” category anyway.


SUBWAYblogger is getting reports that an officer was shot in the subway in Queens.

Sources tell us that at least one cop was shot.  A second officer was also injured and taken to the hospital.  Not sure if that officer was shot as well.

The suspect(s) are in custody and are also reported to have been shot.

This all has allegedly occurred at the F train in Queens at 21st Street and 41st Ave.

Update Update: Two officers, Shane Farina and Jason Maass, were attempting to arrest a suspect for using a child’s student fare card (shocking) when a struggle broke out.  The suspect grabbed one of the officer’s guns and opened fire on both of them.

One cop was shot in the chest, the other in the back.

The officers managed to radio ahead to their lieutenant, who was positioned near the token booth.  The lieutenant drew down on the suspect and opened fire, shooting the suspect 4 times.

Suspect Raul Nunez faces attempted murder and could get 25 years to life.

Oh the “See Something, Say Something” lameness continues.  The MTA has some new security ads out.

We took the three of them and strung them together.  They show unattended bags, with no voiceover.  Then shows the tip line phone number.  That’s it.  For some reason, the sound didn’t work when I put them together.  Just imagine the sounds of the subway.

So yeah.  I’m hoping they had interns make these, and didn’t actually pay anyone to make them.  What a joke.

Today I witnessed probably one of the coolest things I think I’ve seen on the subway to date.

There was a small group of teenage kids standing just outside the turnstiles.  You could tell just by looking at them that they were up to no good.

Couldn’t really tell how old they were.  I’m guessing they were about 14 or 15 years old.  They were all pretty tall.  One was probably 6 feet tall.  But they looked young.  Really lanky.  Frankly, it was almost comical because they were really tall, super skinny, but had huuuuuuuuuge baggy pants and hoodies on.  Like all three of them could have fit into the same pair of pants at the same time.

Anyway, one of them made a dash for it to skip out on the fare and hop the turnstile.  They didn’t realize that leaning against the wall was a cop, just out of their view.

The cop ran over just as the second one was going over.  Both of the kid’s feet were in mid air when the cop went two hands on.  He snatched him out of mid air and in one clean motion dropped him chest first onto the ground.  It was amazing.

The kid that made it over already took off running.  The other kid who had not yet attempted the jump took off out of the station.  So two got away, but the look on their faces was priceless.

Cuffs on.  Game over.

Subway super hero Wesley Autrey is mourning the loss of his surrogate son.

Roy Huntley, 24, was found on a Manhattan street on Sunday with a gunshot wound to the head.  Police believe he may have gotten into a fight with his attackers.

Autrey told reporters he treated Huntley “like he was my own.”

Wouldn’t you know it.  Just as the MTBA up north digs into their own issues with computer geeks hacking the CharlieCard, it turns out we have our own homegrown hackers right here in NYC.

I had written a post wishing the MIT students would come down here and beat up on the Metrocard system, but it turns out there was a few guys that already hit the jackpot…a $800,000 jackpot as a matter of fact.

Apparently, three guys discovered a vulnerable Metrocard machine at Penn Station that they somehow got to spit out cards.  They would then sell the rides.

However, it looks like they started the scam back in 2005, and it’s taken this long for them to arrest the guys.  An audit revealed the discrepancy, but who knows how long that took to uncover.