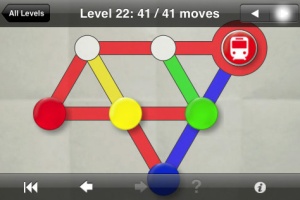 It’s sort of Rubik’s cube like.  Maybe not.  It’s sort of hard to describe, but I will try.

Basically, you have to move your “train” from one end of the puzzle board to the destination.  Along the way, you can only travel on your own line (color).  Meanwhile, there are other trains in front of you that must be moved out of the way for you to pass.

So on each board, it gets more and more tricky.  Eventually, you have to start thinking multiple moves ahead of time. 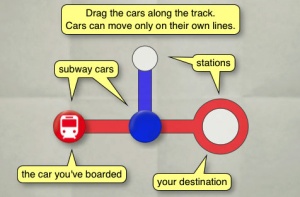 The app is just $2.99.  Personally, I’ve bought many games for my iTouch.  A lot of them I play for a while and then never go back to.  There’s a few, like Tetris, that I play all the time because they never get old.  Subway Shuffle is another one, and not just because I’m riding the subway while playing.

There’s 84 levels which I have come nowhere near finishing.

How many levels have you beaten?