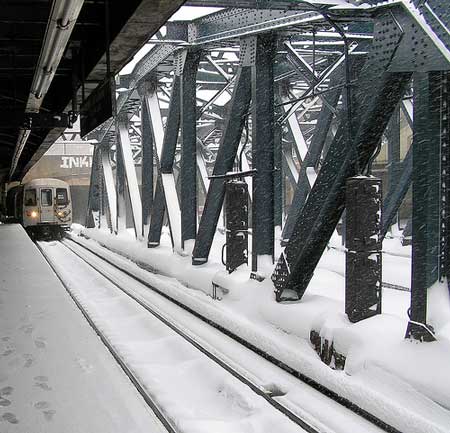 The first real snow of the season might be just around the corner.  Will the subway hold up?  NYC Transit Spokesman Paul Fleuranges says YES.  But haven’t we heard that before?

You might not think that snow could do anything to the subway, but you would be wrong.  The subway is exposed to surface level weather at many points.  So, anywhere the trains run above ground can be overrun with snow!  We all know that once there is a bottleneck in one area, the entire line suffers.

Believe it or not though, the MTA has snowblower trains and anti-ice trains to clear the tracks.  Who knew?  They even run trains empty to keep the rails from freezing.

“Underground service isn’t affected, and elevated service is for the most part ok due to constant running of trains keeps rails free of ice etc,” says Fleuranges.

But that wasn’t really the case during the blizzard last year.  There were lots of service disruptions.  So I guess the bottom line is you should play it safe and leave extra commute time on Wednesday morning.  6-10 inches of snow, wind, freezing rain, ice…mmm it’s gonna be fun.