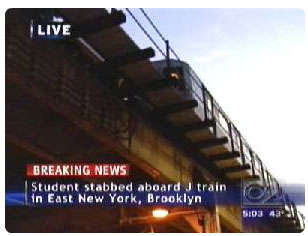 Following up on what we posted earlier, there was a stabbing on the J train in Brooklyn. However, the victim is 17 years old, not 15 as we previously had heard.

At this point, there isn’t much else that is known. Police say they may have a suspect in custody.

The weapon was a scary looking filet knife, about 8 inches long and curved.

The kid that was stabbed is in critical condition.

How he got stabbed is anyone’s guess at this time. The police aren’t really letting much information out, so that’s it for now!