Around 7:30am, a report of a person struck by a train went out across police radios.

The incident occurred around 116th Street & Broadway on the Uptown 1 line.  The thing we find odd is the report that the person was dead on arrival between 116th and 125th.  That makes it sound like the person may have been in the tunnel when they were hit.  That’s just an assumption.

Typically, people that jump or fall off the platform die right there.  There’s no report of the bodies being found “between” stops.

However, I suppose it is possible that he person was hit and dragged as the train pulled out of the station.

The incident tied up trains for hours right in the heart of rush hour.  Beyond that, not too many details are available.  That makes me think that it was probably a homeless person living in the tunnels that got hit. 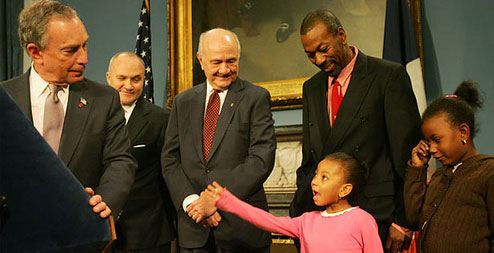 Subway super hero Wesley Autrey is mourning the loss of his surrogate son.

Roy Huntley, 24, was found on a Manhattan street on Sunday with a gunshot wound to the head.  Police believe he may have gotten into a fight with his attackers.

Autrey told reporters he treated Huntley “like he was my own.”

The natives are getting restless folks.  In 3 separate incidents, people found themselves under subway trains.

SUWBAYblogger assumes that they were suicide attempts unless other information is available.  Why?  Isn’t that cold?  Well maybe, but there’s good reason.

The media would report if someone were pushed onto the tracks.  That would be a big story.  If someone had a heart attack and fell accidentally, that would be reported too, but probably not as big.

Suicides, however, are very rarely reported (if ever) due to fear of the mentally unstable that my copy-cat the act.  So when people end up on the tracks, and then you never hear anything about it, it was probably a suicide.

Anyway, there was one incident this morning around 3:45AM at the Beverly Rd Q train station in Brooklyn.  Emergency workers arrived on the scene, but the person was already dead.

Then around 8:30AM, there was another jumper.  This time it was on the uptown 4 train platform at Union Square.  No word on that one, but going to assume there was a death there.

Then just a couple hours ago on the F line at Delancey Street, another person was “confirmed” to be pinned under a train.  The patient was removed in an unknown condition.

Last night around 11:30 a man jumped in front of the 23 uptown at 96th street.  I was in the first car and it was really awful.  The train conductor confirmed that it was a jumper; she said “he was facing the other direction; he just whirled around and jumped.”  It was such a horrible experience, and they let us off the train before the medics even arrived, and I did not stick around to see any more.

Well, I did find some details.  END_OF_DOCUMENT_TOKEN_TO_BE_REPLACED

I was on my way to DTW for Yanira Castro’s installation piece, when I almost tripped on who I thought was on ordinary subway vagrant on the steps leading outside to the NE corner of 14th street at 6th avenue. (at the F stop)  I quickly realized that this man, bum or not, was not breathing and there was a small mass of people beginning to collect around the station. Mostly, people were as frozen as the man was.

I asked if anyone had a mirror, if the police had been called, had anytime tried to do CPR. No one really said anything, other than “he fell.” What worried me was that perhaps no one tried to help him immediately for fear he was homeless.

After about 5 minutes, the police and medics began pouring in and shoving people out of the way. No one in the crowd was of much help. Even the station agent who identified the man as a security agent who worked in the neighborhood, (and who presumably called 911) didn’t seem particularly concerned, or rather, there was a blatant lack of urgency or panic in his manner. CPR was performed for about 10 minutes but to no avail. A few minutes later, more support arrived to carry him away.

I do hope he is alive.

There are reports this morning that there was a person under a train that was dead on arrival at the 49th Street stop on the N train.

SUBYWAYblogger reader Melody brought this to our attention, and then we were able to confirm it on the police scanner logs.

Melody was on the train that allegedly struck the person. However, she was unable to find any info about it in the main stream media or blogs. Again, for those that do not know, the main stream media rarely reports suicides. This is because reporting them often causes more suicides. People of an unstable nature, who might be considering killing themselves, often will become more likely to do so if they think it will get media attention. Often, the suicide is a cry for attention in the first place.

However, according to Melody’s report, there were other witnesses who said the guy was very drunk and just fell on to the tracks as the train was coming. So it might not have been a purposeful suicide in the first place. Might have just been a drunk guy who fell.

Without doing a Freedom of Information Act search in a few weeks, we may never know what really happened.

UPDATE: Here’s what one witness claims to have seen.

At that point we were evacuated from the train, and were waiting on the platform for further instruction, when we hear sirens. A bunch of cops showed up, then someone came in with one of those orange medi-boards, and the cops immediately kicked everyone out saying, “This station is closed!!!”

END_OF_DOCUMENT_TOKEN_TO_BE_REPLACED

Has there been an insane amount of transit failures this week, or is it me?

There was Tuesday’s insanity, with what was first reported as a train derailment.  Turns out to have been a fairly massive mechanical failure.

Then, there was today’s crap on the 1, 2, and 3 line.  Still don’t know what the hell that was all about.  What I do know is that I am $20 lighter today thanks to the gypsy cab I had to take.  (Of course, everyone was looking for a cab.)

Oh and let’s not forget the suicide jumper we had in the middle of the day today, that was special.

It’s a roll of the dice every morning.

Back to top
SUBWAYblogger
Powered by WordPress.com.